The Ultrasonic Point Level System 1670 Series is an ideal solution for detecting the interface level of two non-homogenous liquids, or the interface level of solids suspended in liquid. The probe is constructed in 316LSS material. The electronic module is captured in a plastic cassette and is mounted in a NEMA  4/ 7 explosion proof housing. An LED indicator on the electronic module offers a visual status of the system. Field selectable Fail safe allows for the relays to be energized on power up or in normal condition to close when liquid is present. A Demand Push button self-test feature on the electronic module assures the user the system is functioning correctly. 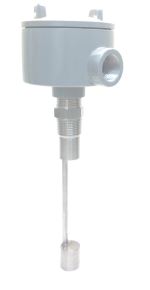